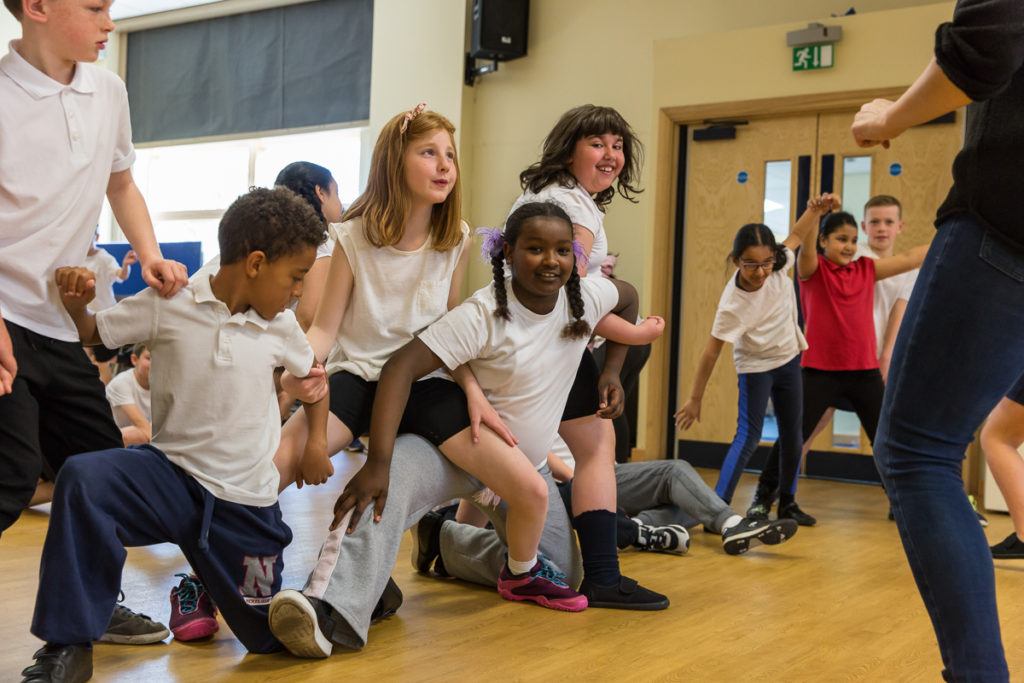 How can dance enable reluctant writers to compose narrative texts more effectively? This is the question that darts and Year 4 teachers from Town Field Primary sought to answer by the end of their 19 week project together.

Teachers wanted to discover whether the use of dance could help pupils to develop a more positive attitude to written tasks, plan a piece of writing independently and produce a complete piece of writing to match a purpose, for example a letter or diary entry.

Over the course of the spring and summer term 2016, Hayley Beecher led Year 4 pupils in sessions designed to complement class topics such as 1066 and the Battle of Hastings. She demonstrated literary concepts through physical play and exploration, using dance to consider story construction and the need to create a beginning, middle and end. Hayley explored facts and feelings through movement, showing pupils how to use their bodies to communicate without words, before building vocabulary and extending understanding. Clear links were made to adjectives, feelings, actions and movement.

Key words were reflected in specific dance moves, which were choreographed by the children and developed until the end of the project, by which time the children had created their own dance. Pupils were allowed to take control and make decisions about the moves they used, which motivated them to think carefully about their actions and expressions. Teachers told us;

I genuinely think that building it up week on week has been really important.

By working on new concepts a bit at a time pupils were able to revisit ideas from previous weeks, giving them the opportunity to consolidate their learning;

Because it has been building and building it has been really effective and I feel like they have mastered it. And that will stick now, they won’t forget it.

Hayley’s sessions were immediately followed by a writing activity led by the class teacher that explicitly related to the learning from the dance session. Teachers said;

It just worked really nicely. We went straight back into the classroom and wrote the words down so there wasn’t a gap. This was quite a nice process.

The dance sessions gave children a more concrete picture of the themes within the topic work, allowing them to make a connection between the actions, sequences and words used in their writing tasks.

By the midway point of the project teachers observed that pupils’ imaginations had become much stronger and they were meeting the overriding objective of creating a full piece of structured text. Reluctant writers were more engaged and focused;

They have more to write about because of it.

Pupils quickly adapted to having Hayley come in to teach them and the initial period of getting to know one another and becoming comfortable was relatively short. Teachers noted;

It hasn’t been a long road [to] getting focused.

Pupils also responded well to new challenges and changes in environment. Transferring control to an outside expert gave teachers the opportunity to experience sessions from the point of view of their pupils;

We are at the same level as the children; we don’t know what is happening next, like them.

Working with an experienced dance practitioner allowed teachers the chance to step back and observe their class from a different viewpoint and really see what each child was achieving.

You see those that are blossoming but [you also see] those that do need a little bit more help.

As with many of darts’ long-term projects within schools, teachers noticed other wider benefits of taking part and have seen a difference in pupils that has lasted beyond the life of the project. Teachers have noted an increase in confidence, both on the playground and within the classroom.

One child in particular has made significant improvements. Where previously he would have been the last person to contribute to discussion, techniques such as hot seating have given him that self-assurance;

He has a member of support staff who comes in and she is always making comments about this. He is always talking about what we have done in the session beforehand because he has enjoyed it so much.

Pupils have a more positive attitude in the classroom, contributing to whole class discussions, working independently and getting straight on to task. Where children would once have been reluctant to contribute for fear of getting something wrong, they now feel more able to share and are no longer looking for reassurance. The literary concepts they learned about through dance are now familiar and can be applied straight away to other tasks.

Having completed the project, further applications for dance and literacy, particularly in relation to language acquisition, have now become apparent. Whilst a word list is an abstract concept, dance allows pupils to physically move and feel and label their actions, meaning that words really resonate with them. Teachers told us;

‘It’s a really powerful thing. We have so many children that have English as a second language; especially earlier in the school year when their English is still developing I think something like this would really help.’