First adventure: 1,600kms by bike from York to Cadiz to raise money for War Child 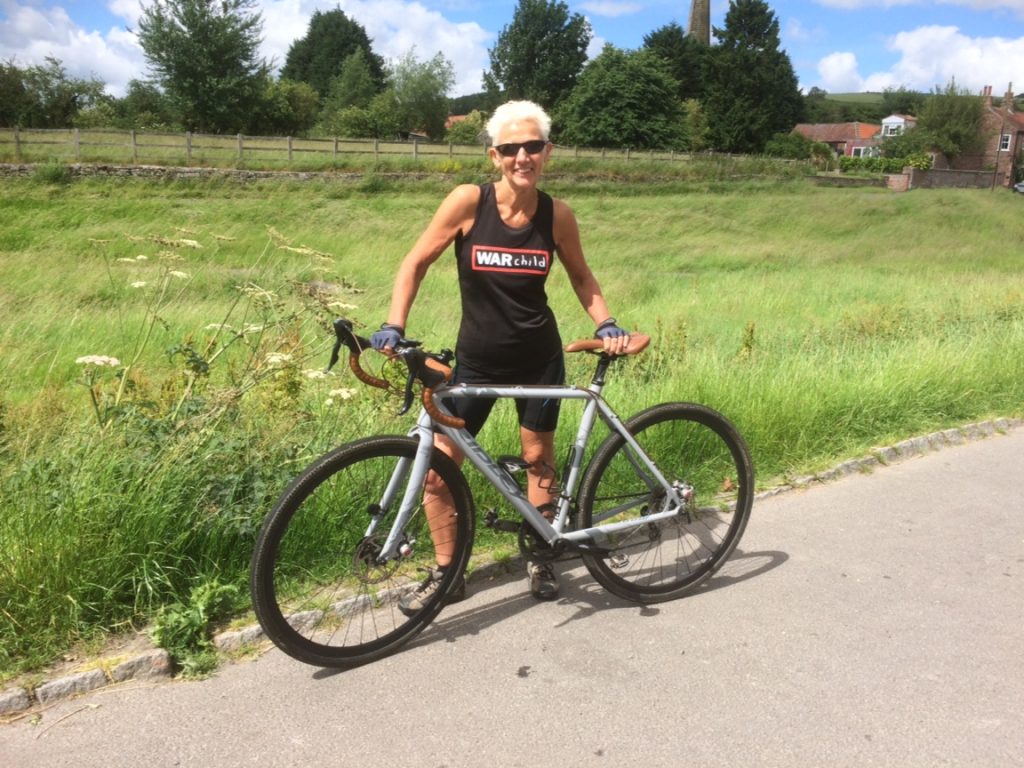 Elaine Hirst, Co-Director leaves darts at the end of July – after 25 years – building and co-leading the organisation. She is not using the word retire – but will not be seeking paid work elsewhere!

She is using this significant point in her life to plan adventures of all sorts – exploring on wheels or on foot across countries – through and over mountains, rain forests, rice paddies, deserts etc. She is also going to be investigating whether any of the skills and personal qualities she has developed through her working life are useful and applicable to a humanitarian cause in a troubled area of the world.

At the end of August, for her first (ad)venture she is setting off from her house near York to cycle to Cadiz in southern Spain – a total of 1,600kms – as a fundraiser for the charity War Child – and to raise awareness of their important work.

War Child was founded by two filmmakers working in former Yugoslavia in 1993 who were so shocked by the impact that war had on the lives of children who were utterly powerless victims.

War Child works long term in six countries – so that its work is focused and can have long lasting healing benefits for the children it works with:

We aim to reach children as early as possible when conflict breaks out, and stay on to support them – long after the TV cameras have gone home. We help keep them safe, give them an education, and equip them with skills for the future.

The ride will be a mega – personal – physical challenge. Elaine only started riding “seriously” – i.e. any distance or speed 5 years ago. It was only last year that she first cycled 100 kms in one day in the Heart of the Wolds Sportive. She has ridden the Tour de Yorkshire for the past three years starting with the short route and graduating to medium for the last two. Her longest duration of ride is 5 days: starting with Sustrans route Way of the Roses – and her average daily distance to date has been 80kms.

She is riding from York to Portsmouth – ferry to Santander – over Los Picos to join El Camino de Santiago (pilgrim route) – to Leon and then due south on La Ruta de Plata (another pilgrim route) to Seville and then onwards to Cadiz.

She is aiming to raise at least £3,200 – the equivalent of £2 per kilometre. If you would like to say Goodbye to Elaine by supporting her (ad)venture then her Just Giving page is: www.justgiving.com/fundraising/1600kmstocadiz

I have loved working at darts – yes, honestly all the time I have worked here! We have grown and changed together: darts from a tiny team of just 3 in a room at Bentley Library (as part of Recreation and Culture Directorate of DMBC) to a thriving company of 33 based at The Point; me from an Arts Council trainee on a bursary to a Co-Director leading a Delivery Team of 12. All of the changes and growth have brought new challenges and stimuli. Life has never felt still – and it has felt like I have had many many jobs within the one!

darts is a lovely company to work for – and employs a fabulous team who will all continue to thrive and grow through this period of change. I am proud of the work I have seen delivered over the past 25 years: I feel that the need for the work that darts does is greater than ever.