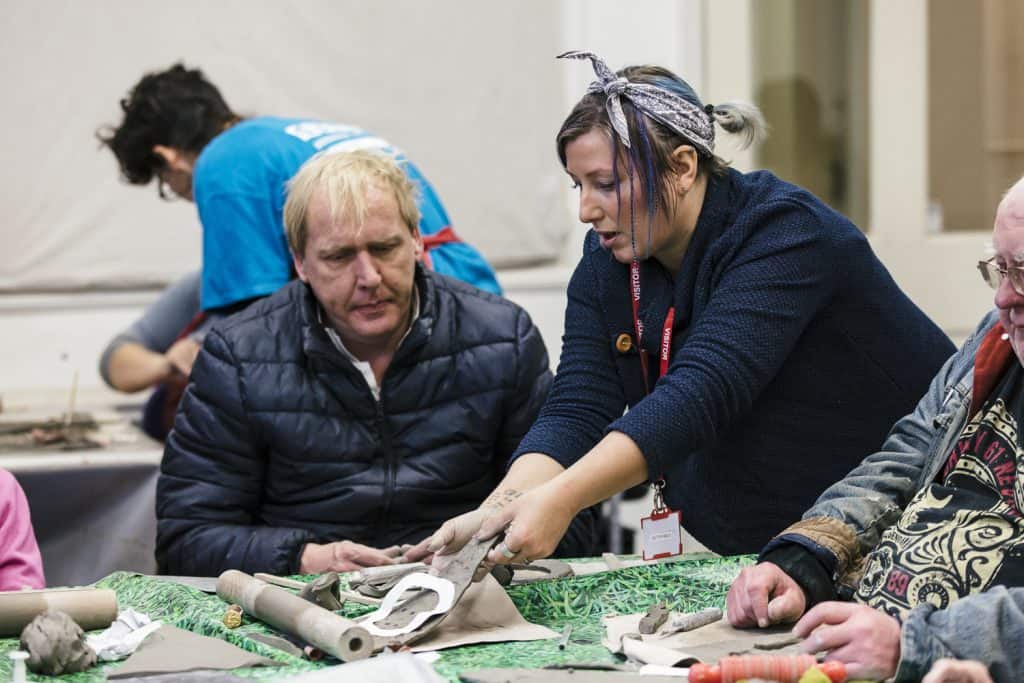 Diane (not her real name) first came to The Point to have a one to one with her support worker. The support worker had been to the Café at The Point previously, and had asked a member of staff what groups might be suitable for Diane to attend. On their first visit together, Bob – a participation co-ordinator for the Creative Directions project – showed Diane and her support worker around the building so they felt comfortable coming to the sessions and knew what to expect.

Diane regularly attends a day centre and lives in a supported living setting. She says that coming to Creative Directions is different and has allowed her to meet new friends:

“I thought this was a good place to join in with doing arts and crafts and music and making stuff… It’s the people – they’re friendly – and the banter. The artists are brilliant, I did pottery, I made an owl, a mug. We went to Cast to see the things we’d made. I like afternoon sessions, they’re more lively.”

Diane’s support worker agrees and says that Diane loves to have a planned activity to look forward to and that she enjoys being taught to do new things:

This breaks Diane’s week up, otherwise she’s just with the same people every day… It took me a year to find something that would work for us…With my client having a learning disability, she’s using her sensory skills and her coordination. It’s good for wellbeing, she’s socialising as part of the creative activity.

Lockdown and the impact of Covid-19

Diane lost both of her parents within nine months of each other – one just before, and one during lockdown. We kept in touch with all of our participants by phone throughout the pandemic and delivered creative activities and special doodle books through the post and to people’s doorsteps.

During the phonecalls. Diane told us about how she was doing, and about how much she was enjoying the creative packs. Diane’s support worker told us:

She always did all the activities in the post and looked forward to them. She was busy doing bottles and that printing. It's improved her mental health…this has got her out of her shell, she’s less anxious, she talks to more people…There have been so many cut backs. During lockdown they’ve stopped all socialising.

Why the Creative Directions approach works

Diane’s support worker told us how important it is that our staff team recognise mental health and loneliness. She says that the group brings people together and ensures that they have someone to talk to.

“I said if I weren’t coming with Diane, I’d be coming for myself.”

Diane’s support worker made it clear that she is there to support Diane and not to do things for her. It’s important to give Diane the encouragement to do things on her own. She says that Creative Directions encourages her to be independent and ask questions, to volunteer for different things, and to take on responsibility such as acting as the conductor during a music activity one week.

“I don’t think people know enough about it. It needs to be advertised more.”

What would happen if Creative Directions ended?

Diane’s support worker feels that if Creative Directions stopped running it would cause people’s mental health problems to be worse, which in turn will negatively affect the community. It’s a safe space to overcome your fears and talk about them with others in similar situations.

I’d miss it. I wouldn’t be able to see my friends or speak to them. I think it would be hard to find something else. The people at Creative Directions are fantastic. It’s the highlight of my week, I look forward to going every Thursday.