Music and Makaton at Grange Lane

Can music and Makaton improve communication and confidence? Grange Lane Infant Academy and darts explored this question together over the course of the 2016-17 academic year.

Research suggests that high quality experiences focusing on beat, rhythm, pitch, composition and improvisation can help children improve their reading, speech, listening and phonological awareness, which in turn impacts their ability to express themselves with confidence. Musician Dyzelle worked alongside teachers to design and deliver an engaging project for KS1 pupils, intended to develop these basic building blocks of music.

Before the project, teachers told us they had limited confidence in delivering music lessons. Immediately, bespoke sessions with a music specialist changed the dynamic within the classroom. Having someone demonstrating activities and being able to ask questions of that person there and then made a real difference to teachers:

‘I’ve come from not being able to read music or play an instrument, so I’ve found it really useful. My confidence and my own development has increased.’

By bringing in a professional musician, teachers and pupils were able to go on a journey and develop their skills together. Teachers told us that certain pupils struggle to engage with reading, writing or maths for example because they immediately feel that there are limits to their abilities, even though this may not be the case. The music and Makaton sessions helped to break down these perceived barriers:

‘Everyone was taking risks. [Pupils] saw [teachers] asking questions. We were all on a level and we were all learning together.’

Teachers saw the confidence of the children grow week by week. This was evident not just in individual behaviour, but in the way they felt able to contribute to school life more generally. Characteristically shy or quiet children began speaking up voluntarily, communicating with larger groups and adults, whilst children who were usually very vocal felt able to sit and listen without needing to shout out. All became less afraid of making mistakes and were more willing to try new things:

‘[She] is usually very quiet and shy but today she used a very loud voice.’

The children looked forward to their time with Dyzelle and were motivated by the fresh ideas and new instruments she was able to bring into school. This encouraged them to really listen and engage fully and as such, pupils often exceeded the expectations of their teachers during sessions:

‘When [Dyzelle] picked him I thought ‘He won’t do this’ and he stood up and sang so beautifully and was so proud. That’s something I would never have expected him to do at the beginning.’

As well as the technical aspect of the music sessions, the use of Makaton also influenced teachers and pupils at Grange Lane Infant Academy. Makaton, a language programme designed to support speech by using signs and symbols, is particularly helpful for those who find verbal communication difficult. Teachers told us that many children within the school struggle with communication or have speech and language difficulties. By introducing Makaton, these children were able to express themselves more fully, voicing their opinions, conveying emotions and supporting peers:

‘It was much more of an even playing field in terms of being able to express yourself and communicate using music and Makaton.’

All children became engaged with signing, remembering signs and improving week by week. Makaton not only became part of pupil’s lives within the classroom, but also influenced life outside of school. Makaton fostered communication at home and gave caregivers an insight into what children were learning. Caregivers of children across the key stage reported regular use of Makaton at home and a desire to learn more about it, with some parents researching signs online:

‘I think it was a way of communicating with mum and mum was really interested in it. They found it very useful at home and she really enjoys using it.’ 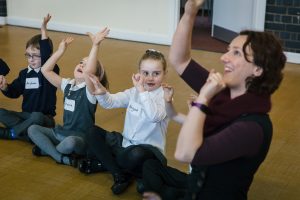 Teachers’ professional practice was at the forefront of project planning to ensure a legacy for the work beyond the sessions. Dyzelle modelled teaching techniques and supported staff to develop their music delivery independently, to ensure that they could carry what they learned into other activity within the classroom:

‘It was nice to have tools, exercises and activities that we can use again; we can put these into our planning and know that they will fit.’

The commitment of teachers to incorporate new techniques and use of Makaton into lessons outside the music sessions has really helped to embed the learning. Practicing these new skills in this way will ensure that music and Makaton becomes part of the ethos of the school:

‘What we’ve done is so creative. I’ve found it’s very cross curricular and I can now adapt and change it to any different topic, which is wonderful.’