Find out more about this year's Transitions project activity 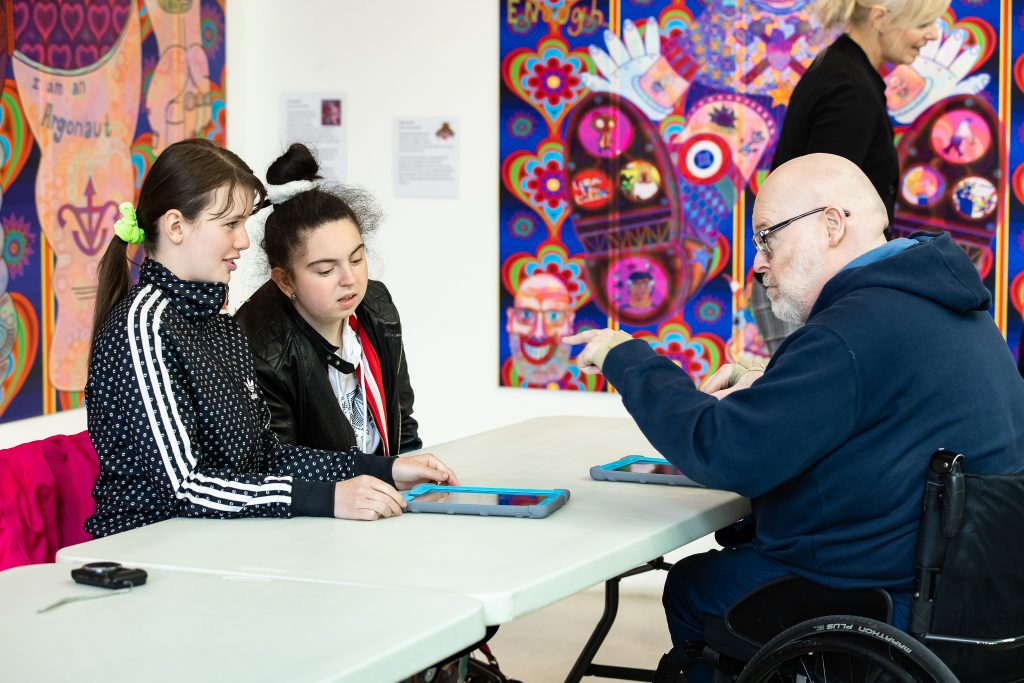 Our Transitions project has provided Disabled young people, who are on the cusp of adulthood, with improved lifeskills, careers focused opportunities and progression towards independence.

An experienced team of professional artists delivered bespoke sessions with older young people in three Doncaster Special Schools. The process started with a series of sessions with drama practitioner, Val Monti Holland, who got to know the young people, found out about their skills, interests and ambitions and collaborated with them to design the next stage in the project. Drama techniques, games and group discussion enabled the group to share their personalities and aspirations.

Introduction sessions with drama practitioner, Val Monti Holland explored pupils feelings about the world of work, their aspirations and possible barriers. Musician Rob Pearson, poet and creative writer, Sile Sibanda and visual artist, Karen Hall worked with the groups to create soundtracks, poems and infinity books that reflected their thoughts and aspirations around careers and future employability. Some examples of the activities within the creative writing sessions include mind maps – young people created maps of the different things/activities they would like to do/be when they finish school. They were allowed to be as creative as they wanted and really think outside the box. They then chose one of those activities and wrote all the verbs they could think of that were associated before creating sentences and stanzas for their short poems

I come from Pizza
From Jerk chicken and Caribbean cuisine
From being part Jamaican and part Nigerian
I come from being hard to make friends as I am an introvert
I come from a comfortable bed
From Adidas shoes and Apple iPhones
I come from an open style of living
Cosy, warm, peaceful
I come from a sturdy oak tree
Strong, steady, calm
I come from Christianity
I come from Bedford

The young people chose to develop a project with Dan Jones – a local Sculptor who has work installed internationally. Participants created self-portraits, giving themselves the opportunity to reflect on who they perceived themselves to be and how others perceived them. Over the course of the weeks, the young people became more engaged in the process – with portraits becoming more successful as a result of them taking care and thinking and carefully looking at what they were doing. This process further developed independence and participants worked hard to achieve an end result that they were proud of.

Further work with drama worker, Val Monti Holland built on initial thoughts about the world of work, potential barriers and the focus on myth-busting. Each group created their own composite character so that they could explore the type of job this character could do, what they might experience and how they might cope with different situations within their job. The young people were keen to develop a handbook for teachers, parents/carers and employers that would help them to understand their needs and abilities when entering the world of work – this became the final element of the Transitions project.

The young people then had an opportunity to come together at The Point and work collaboratively with artist Jason-Wilsher-Mills. Jason is internationally famous and was exhibiting his ‘Jason and the Argonauts’ exhibition at The Point. Jason is a wheelchair user and had worked with Disabled adults across the country to create this incredible exhibition that is full of colour, personal stories and positive representation of disabled people as superheroes. Jason worked with all three groups as a mentor; developing the ideas and personal aspirations that have been developing over the course of the project. Jason shared his experiences attending special schools as a child and the discrimination he faced; he asked each student to explore their understanding of what an artist is and the different ways we can make art. Students were encouraged to work independently by using ipads to create their portraits, with many receiving less hands-on support than normal. One teacher reflected, ‘This was an incredible session. Students saw themselves reflected in Jason’s experiences and were amazed by what they could create by using the ipads to make art’. In all the schools, this has been highlighted as a key moment of understanding that being an artist can be a job – for anyone.

The young people followed up their mentoring with Jason with a careers event and project showcase. The three groups came together again at The Point to share their progression, discuss possibilities and take part in a careers Q&A with a number of project mentors to explore a wider range of jobs and careers. Bob Adams – Participation Co-ordinator, Dyzelle Sutherland – Musician, Sarah Eastaff – Director (Arts & Education), Sophy Sylvester – Fundraiser, James Mulkeen – Photographer, Rob Pearson – Producer/DJ, Ed Syder – Designer/Illustrator/Graphic Artist all took part and shared their experiences of the world of work and how they had come to be in their current role.

The final aspect of the project is to work with illustrator and graphic artist, Ed Syder, to create a handbook as described above. Ed has been working with the groups in all three schools to further explore the myths they want to bust by thinking of all aspects of getting a job and being employed. Ed has produced the final handbook using the young people’s design, images, content and direction, which you can read here. 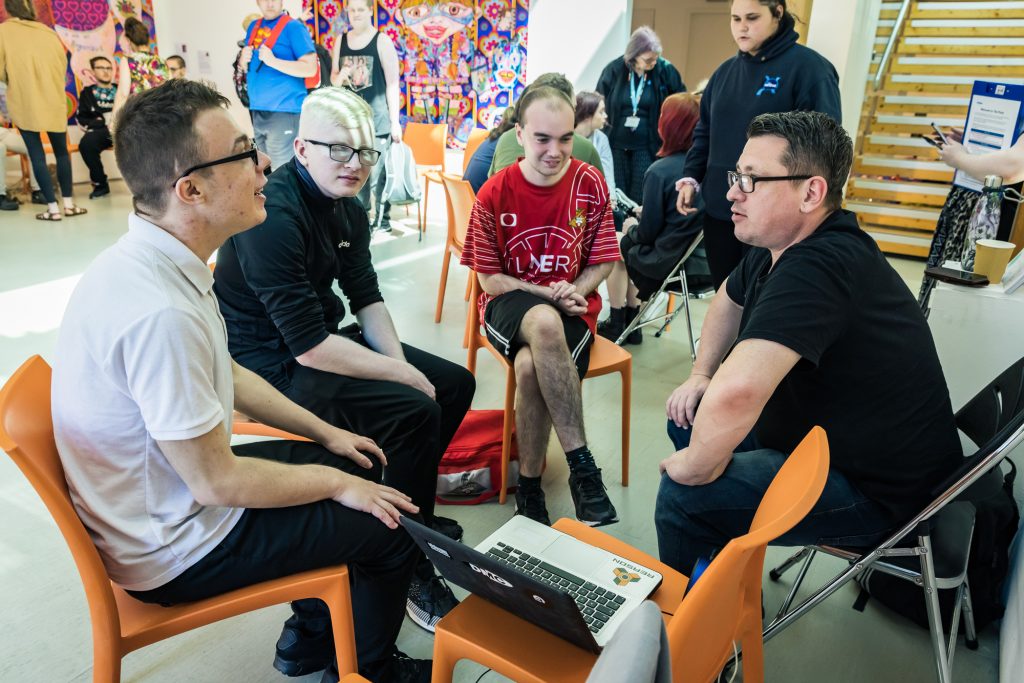 Key outcomes achieved
• Listening to others
• Understanding others’ points of view / empathy
• Speaking in front of a group / presenting
• Achieving a piece of work from start to finish
• Learning from mistakes and becoming more resilient
• Independent thinking, choice and decision-making
• Understanding barriers and finding ways around them
• Confidence in their own abilities, skills and voice

Teachers reported a definite increase in confidence and communication skills across the board and feedback has included:

The students have really enjoyed all aspects of the project and working with different artist and art forms. They particularly liked working with DJ Rob using the iPad to create their own music. One particular student really loves drawing and through the project has started to look at different roles where his love of drawing can be used. I have noticed that some of the students have become more confident in talking to unfamiliar others and also started to look at different careers related to the arts.

I wanted to thank you for organising the event. All my students loved the experience and it was really nice to see them interacting with unfamiliar others in such a positive way. They have really enjoyed the project and meeting new people and exploring different art forms.

Thank you for such a wonderful morning. It is so nice to see our students celebrated, sharing their experiences with a group of young people with similar experiences. They loved finding out more about the jobs in the arts and we look forward to visiting again soon.