Find out more about our work with under 5s 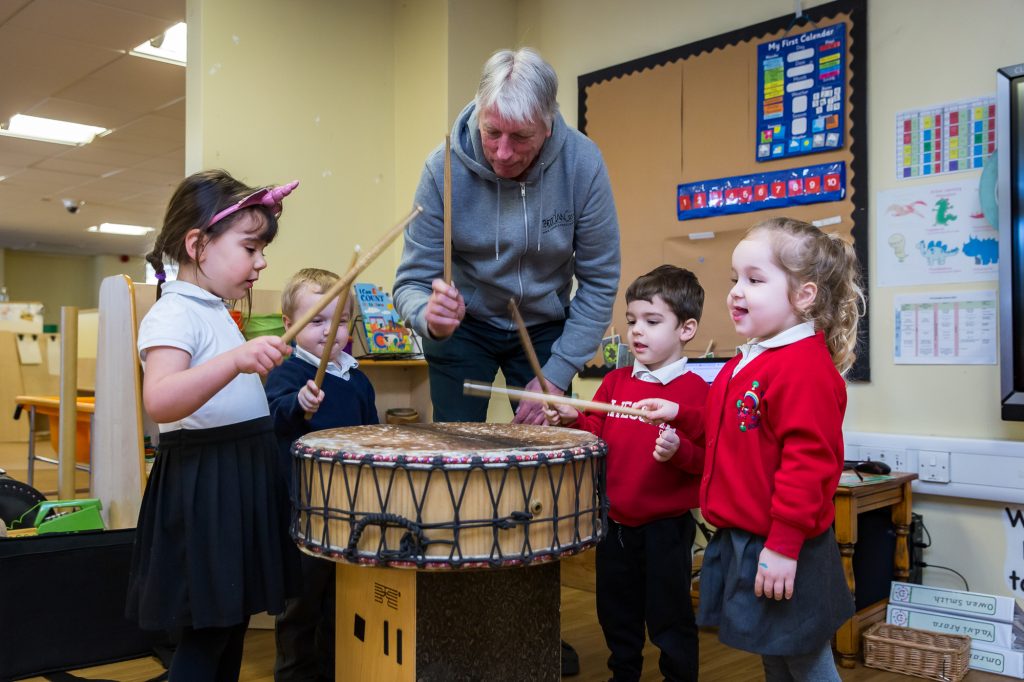 What is Tuneful Chatter?
Tuneful chatter is a creative approach to early years development that focuses on communication and language, personal, social and emotional development and gross motor movement. darts has developed the approach over 30+ years through a wide variety of projects across the Doncaster borough in nurseries, schools, community halls, libraries and at The Point in central Doncaster.

We kept in touch with early years practitioners throughout the Covid-19 pandemic and found that there was a significant impact both on families of 0-5 year olds, and on the children themselves. Evidence from Ofsted research interviews with early years providers shows the pandemic has substantially delayed the learning of young children; particularly personal, social and emotional development. Doncaster Primary Schools have told us that pupils are struggling. They don’t know how to listen, sit and concentrate, focus, take turns or interact with adults. Many of those for whom English is an Additional Language haven’t spoken English at home during lockdowns and have fallen behind with language development.

darts secured funding through Doncaster Council and the Additional Restrictions Grant from South Yorkshire Mayoral Authority in 2022 to developed a music and movement approach in direct response to these challenges during an intense three-month period. This development time enabled darts artists and freelance artists to work collaboratively with each other, and with early years practitioners, to understand the issues and to test and refine their approach. Artists delivered 40 music and movement sessions with groups of 3-5 year old children at Grange Lane Infant Academy and Town Fields Primary School.

Case Study – Cindy
Cindy (not her real name) was in one of the regular music and movement groups at Townfield Primary School. She was supported by a Teaching Assistant and couldn’t stay for long at the beginning. She flitted in and out, to get a sense of what was going on.

The artists made sure that when Cindy was in the room, she could be included in creative activity as much as possible – showing her what the instruments sounded like and engaging her in in playing them herself.

As the project continued Cindy stayed longer and longer and became part of the group for periods of time. Her focus was magical to behold: real concentration aligned to the sounds that she was hearing. She would sit still and sometimes create a high pitched voice which was a sign of enjoyment.

The next step happened naturally, and Cindy’s interest moved from listening into playing. She took hold of the instruments and played them with her TA. At one point when we were doing an activity called ‘Elephant Steps’ she played the big drum along with the musician and showed real rhythmic quality. At other times the musician followed her briefly, her TA felt that the response was so valuable that she thinks a continuation with sound and rhythm will be really beneficial to her longer term.

Case Study – Mateu
Mateu (not his real name) was in one of the regular music and movement groups at Townfield school. He had one to one support, and at the beginning of the project was unsettled and anxious. He struggled to stay in session, but the artists agreed with the staff support that he should feel free to dip in and out as Mateu felt comfortable to.

For the first couple of weeks, there was more ‘dipping out’ than staying in, but that was ok. The artists could tell that certain elements of the workshop sparked Mateu’s curiosity – especially Gary’s range of percussion instruments. In the five weeks of the project, the artists saw him moving from a state of not wanting to be in, to having real moments of contentment.

During workshop four, one musician looked over during the final listening section and saw that Mateu was sitting on the floor with his Learning Support Assistant. He was listening to the music and just looked content, which felt like a huge step forward.

Although there wasn’t a stage where Mateu was actively engaging with whole sessions during the five weeks of our project, the artists saw more and more moments where he seemed happy to be in sessions and watch. He began to engage with more and more activities, and we are confident that with further opportunities and an extended block of work, this progress would continue.