Find out how music, movement and Makaton helped Jim to communicate 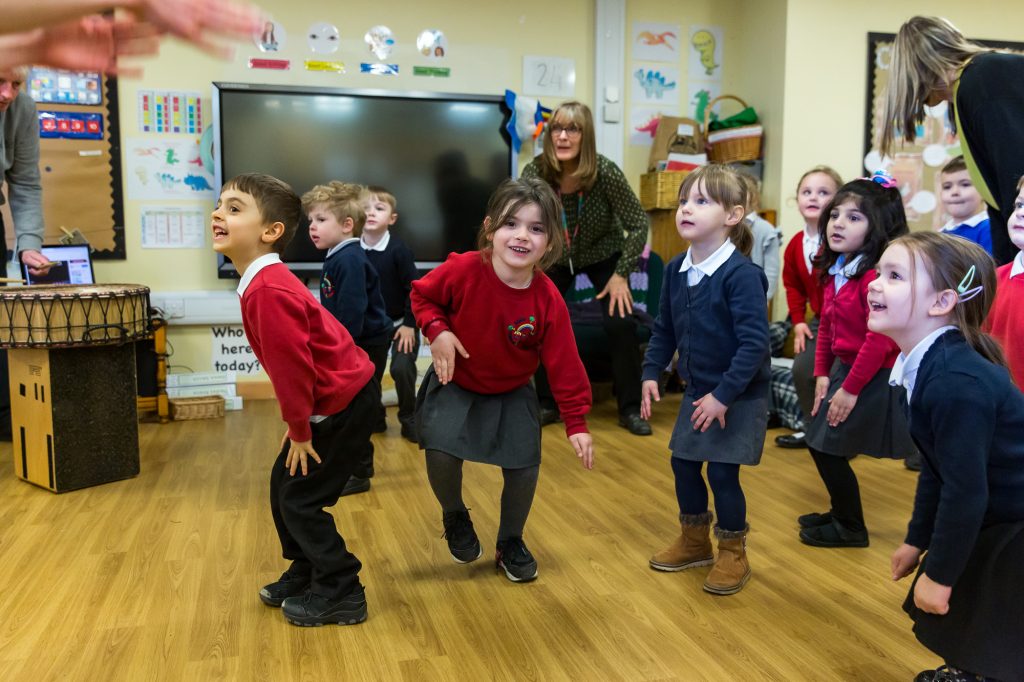 What is Tuneful Chatter?
Tuneful chatter is a creative approach to early years development that focuses on communication and language, personal, social and emotional development and gross motor movement. darts has developed the approach over 30+ years through a wide variety of projects across the Doncaster borough in nurseries, schools, community halls, libraries and at The Point in central Doncaster.

We kept in touch with early years practitioners throughout the Covid-19 pandemic and found that there was a significant impact both on families of 0-5 year olds, and on the children themselves. Evidence from Ofsted research interviews with early years providers shows the pandemic has substantially delayed the learning of young children; particularly personal, social and emotional development. Doncaster Primary Schools have told us that pupils are struggling. They don’t know how to listen, sit and concentrate, focus, take turns or interact with adults. Many of those for whom English is an Additional Language haven’t spoken English at home during lockdowns and have fallen behind with language development.

darts secured funding through Doncaster Council and the Additional Restrictions Grant from South Yorkshire Mayoral Authority in 2022 to developed a music and movement approach in direct response to these challenges during an intense three-month period. This development time enabled darts artists and freelance artists to work collaboratively with each other, and with early years practitioners, to understand the issues and to test and refine their approach. Artists delivered 40 music and movement sessions with groups of 3-5 year old children at Grange Lane and Town Fields Primary Schools.

Case Study – Jim
Jim (not his real name) was in one of the regular music and movement groups at Grange Lane Infant Academy. At the very first session, one of the Learning Support Assistants appeared shocked that Jim was engaged in the activity, and had made a response to one of the artist’s questions. The LSA said “I can’t believe Jim!” – making a positive comment about his engagement, and even went on to enquired on a subsequent week in the staff room about whether he had continued to respond positively in the weekly sessions, as his response had made such an impression on her in that first week.

Staff described Jim as having ‘limited speech’. On one occasion an artist saw Jim with his hand raised up. She signalled to him to answer the question, but could clearly see in his expression a desire to answer, to communicate, and be involved in the present discussion; but he struggled to speak and was unable to get his words out. Artists describe Jim’s attention within the sessions as ‘incredible’ – his eyes rarely drifting away from the activity. He appeared captivated, enthused, and provoked positively by the artistic intervention.

Artists used singing and Makaton signing of the “Hello Song” and “Goodbye Song” consistently each week as strong bookends to every session. These strong opening and closing rituals within the sessions provided Jim with security, giving him the stepping stones to express himself in a bolder way.

As the weeks went on, Jim’s eagerness to create physical gestures to accompany the group’s Makaton signing became stronger. He was able to use Makaton more confidently and proficiently to communicate each session, and his speech also began to improve.

One artist recollects a beautiful moment where she witnessed Jim eagerly helping another child (who also had limited speech) execute the Makaton signs. Jim was seen to be guiding the other child’s hands in the right motion and direction. This demonstration of caring peer support was extremely moving. This moment beautifully exemplifies the power of empowering a child through music, movement, Makaton and storytelling.

It is clear that over the five weeks of participating, this artistic intervention gave a child with limited speech, the accessibility, communicative confidence and passion, to share this with another child, and in doing so, demonstrating the huge progressive leap he had made within his own individual development.