Ian McMillian is a poet,  journalist, playwright and broadcaster, and a longstanding friend of The Point. Recently Ian has been delivering workshops with adults with dementia and their carers through our Singing for Memory and In the Moment projects.  We asked him a few questions about his with darts over the years – read on to find out what he had to say.

What was the first project you were involved in with darts?

This is way back in what we poets call ‘The Mists of Time’, but I think one of the first projects was a football one, this would be back in the early 1990’s. Janet Wood and I were involved in a group making songs and poems about football and I remember someone coming up with, or quoting, the phrase ‘working class ballet’ and we made a song up around that. That project was very much a learning curve for me, teaching me the darts ethos that everyone can be an artist, that everyone can contribute to something that’s greater than the sum of the parts, and that making songs up on the spot is the best fun!

Could you give an idea as to your journey with darts – what’s the span of your work here?

Blimey! It’s been a long and winding road but I became Literature Worker for darts many years ago and immediately sacked that word Literature and became Words Worker because we can all work with words. I remember that early on we decided that we should try and involve everybody in Doncaster in community art. This led to fantastic work with homeless people, young people in Pupil Referral Units, people in NHS settings and, memorably, a group worker in the sex industry at Streetreach.

Have you noticed people benefit from the work darts do?

Well, it’s hard to quantify often but I like to feel there’s joy and love in the room while we’re doing the sessions and once we’ve finished! 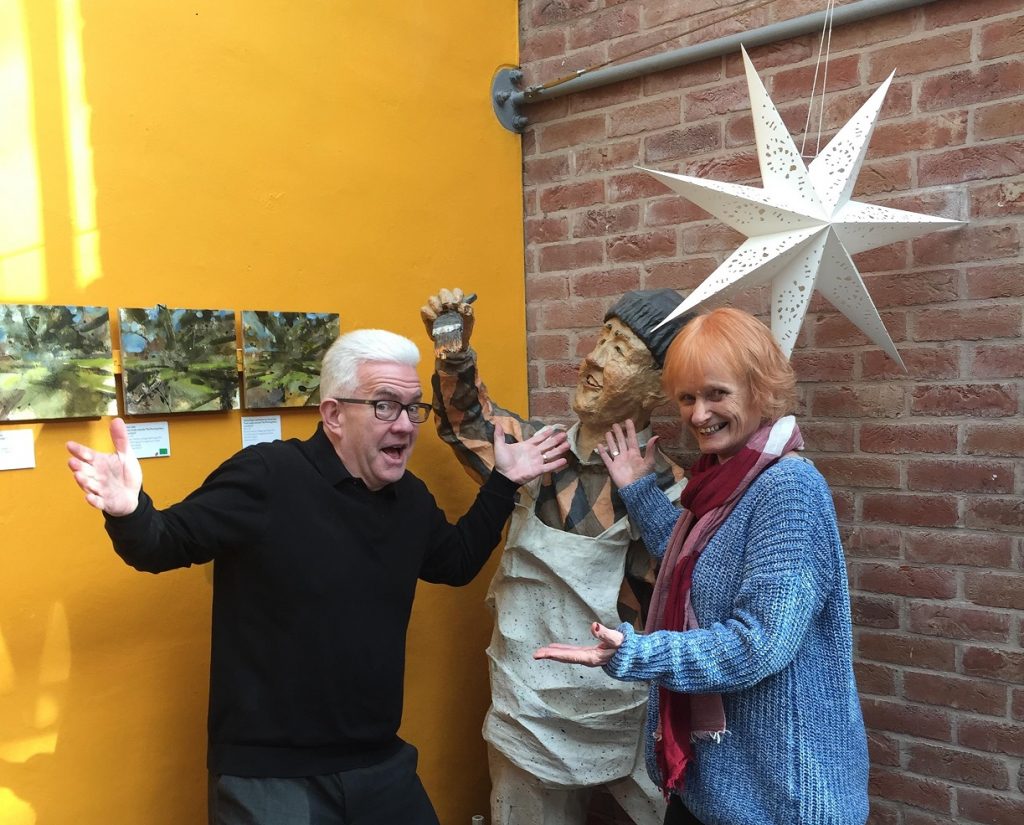 What has been your favourite memory?
I think making the work with the Streetreach women was remarkable; they created a book of poems and with the same sculptor who made the darts clock we made a mobile library from and old pram to distribute the book from, and we pushed the pram through town and reclaimed the streets for poetry.

Funniest moment?!
Filming the Streetreach project for a BBC2 Documentary we were hiding behind a hedge as one of the women, Ruth, recited a poem about the moon. Some coppers turned up and tried to arrest us. Happy darts days!

Some reflections on working with people with dementia on our In the Moment project
The joy about the In The Moment project is that it has been just that: In the Moment. The sessions have been afternoons of glee and delight and insight and sublime, unclassifiable passages of time where art of all kinds was created, discarded, recreated and forgotten. And, as we did all this, whether we knew it or not, we were part of the zeitgeist because the arts and health and/or the arts and wellbeing have been nudged towards the top of all kinds of political, social and cultural agendas over the last few years and at last, you might say, the rest of the world is catching up with darts and the things we do at The Point.

In In The Moment we made songs and soundscapes and pieces of drama that ended up being about themselves, improvisations that seemed to last forever or for no time at all. The chairs would be in a circle and people would come in and join the circle and the sessions would, at their best, just grow out of the chat that started when people joined the circle.

Sometimes someone would be engaged for the whole session or just for a few minutes; people came and went but their artistic presence lingered after they’d gone. In the best of the sessions there was no division at all between the people who were living with dementia and the ones who weren’t. In a kind of utopian way we were getting an image of what the arts could become: they can be a truly level playing field where we can all (if you’ll excuse the frivolous word) gambol.