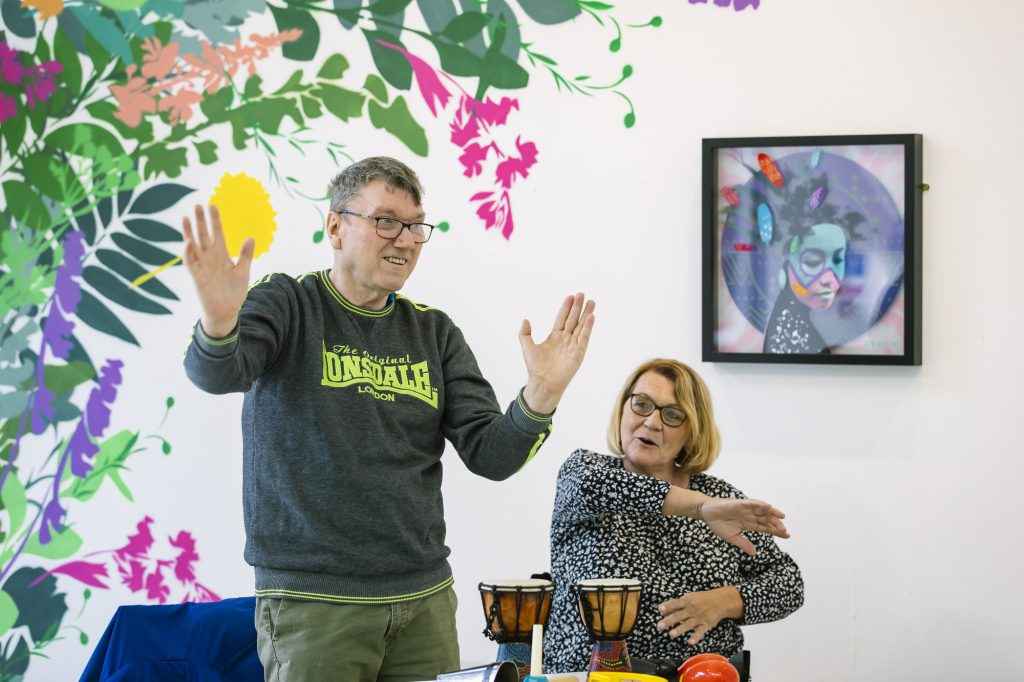 Our blog series exploring the impact of the arts upon well-being is music. Core Artists Janet and Dyzelle had a think about the music projects they’ve been involved in, the benefits they’ve observed and their thoughts on how music can leave a lasting impact.

Tell us about some of the music-related projects and programmes you’ve been involved in.

Dyzelle: I have been working at darts for 5 years now, so I have been involved in all sorts of music projects here, covering everything from Early Years projects, to workshops in residential care homes.  Every day is different here at darts – one day you could be writing song lyrics with a group of adults, the next day you could be taking hundreds of kids to perform at the Royal Albert Hall!

Janet: That was definitely a career highlight – it was a jazz project involving primary school singers and young musicians.

Dyzelle: A lot of my darts work at the moment tends to be based around music education, so I do lots of work with children and young people.  I am also a classical violinist, so outside of darts, I have also done a lot of violin/strings teaching and a lot of work around training young music groups.

Janet: In terms of schools, there’s We Speak Music, a programme of work in Doncaster’s Special Schools; that uses music and Makaton sign language to help children communicate. We’re two years in now, it’s been really rewarding. We work on big singing projects with Doncaster schools (iSing, Sing Out and Sing and Sign), where children from different schools get together and sing a mix of well-known songs and original material created by the pupils. Sing Out is so popular we have to run performances over two nights to fit everyone in!

It’s also our twentieth anniversary of Quirky Choir this year [2017] – Arts Council funded us to work with different artists and groups in collaboration. Recently we’ve been working with Ian McMillan and Singing for Memory – we’ve written eleven new songs together so far, and earlier this week we performed them at a local gig!

What do you personally enjoy the most about music?

Dyzelle: I love the ability that music has to capture memories – pieces of music can often transport me back to a certain time, or remind me of people or places.  It is also the best thing for transforming my mood and energy levels – it can make a stressful, busy day better, it can be the perfect soundtrack to a road-trip, or even make a hard workout that little bit more manageable!

Janet: I have always loved to sing and write songs and get a kick out of performing and especially recording – I’ve had voice problems in the past couple of years though so can’t always rely on what will come out of my mouth at the moment! But I also love writing for choirs and hearing my music being sung back to me is a real thrill.

Are there any particular benefits you’ve observed for people getting involved with music?

Janet: Loads – with singing, there’s a special kind of attention you can get from babies and small children when you stop speaking and start to sing. It’s also true of people with profound disabilities and older people with dementia.

Dyzelle: If young people get really into music, their free time gets filled up with positive, fulfilling things like rehearsals and shows. It lets them learn loads of skills that are really useful when they move on in life – you learn how to motivate yourself, manage your time effectively, collaborate with others and think creatively.

Music completely absorbs you and forces you to forget about everything else, even if only for a short while – there is nothing better after a long day, or a busy week, than making music with people and switching off from anything that is stressing you out.

Janet: Children and young people can become very proud of their musical achievements especially when they have created a piece themselves. We get told time and again by teachers that they have never seen a particular pupil be so engaged. People can pour into a song emotions that they can’t express any other way. It also helps with socialisation and working as a team.

What would you ultimately hope that people get out of music?

Dyzelle: Enjoyment. Making music is fun and it doesn’t matter how good you are – you can make music and enjoy it at any level. It’s something you can be involved with and develop your whole life – you never stop learning and there’s always more instruments to master!

Janet: Above all else, fun, enjoyment and a sense of community.